Posted on November 18, 2022 by Faculty of Arts and Sciences

Ten students served as the inaugural cohort of Bucci fellows, a program that honors the legacy of David Bucci, a Dartmouth neuroscientist and expert on memory and learning who died in 2019.

Ten undergraduate students attended the Society for Neuroscience's annual meeting in San Diego Nov. 12-16. Regarded as the premier global neuroscience conference, the event brings together scientists from around the world to discover new ideas and share their research.

In preparing for and participating in the conference, the students served as the inaugural cohort of Bucci fellows, a program that honors the legacy of David Bucci, a Dartmouth neuroscientist and expert on memory and learning who died in 2019.

The students prepared for the conference over the course of the fall term in a capstone neuroscience seminar taught by assistant professor Katherine Nautiyal. At the meeting, which attracts around 30,000 attendees, students learned about the newest work in neuroscience, met some of the researchers whose papers they read, and participated in professional development activities. Three students presented their work.

"The students pre-planned an itinerary of talks and posters to attend at the conference to learn more about their chosen topic of focus in the seminar, which they spent the term researching," says Nautiyal. "They were able to talk to the authors of the papers they read and ask them questions in person. The students had an amazing time. It's such a wonderful once-in-a-lifetime experience for them."

"I met so many incredible, passionate neuroscientists and am beyond inspired in my own academic pursuits," says Zippy Abraham Paiss '23, a senior neuroscience major. "I am planning on getting an MD, but this conference has piqued my interest in considering an MD/PhD route so that I can continue research as a physician."

"This experience bridged a gap for me between my undergraduate education and the opportunities beyond," says Annaliese OuYang '23, a biology major modified with neuroscience.

"At the conference, I listened to John O' Keefe, the Nobel Prize laureate in 2014 for his discovery of place cells, present a poster on his latest research in hippocampal place cells and their goal-oriented vector fields during navigation," she says. "I tuned into a nanosymposium discussing cerebellar-cortical connections in autism spectrum disorder and am now inspired to convince my lab at Geisel to look at the cerebellar slices that we had previously discarded since our research, like most ASD research, concerns the dentate gyrus of the hippocampus. I also met countless other driven neuroscientists, and expanded options for my future by attending the graduate student fair." 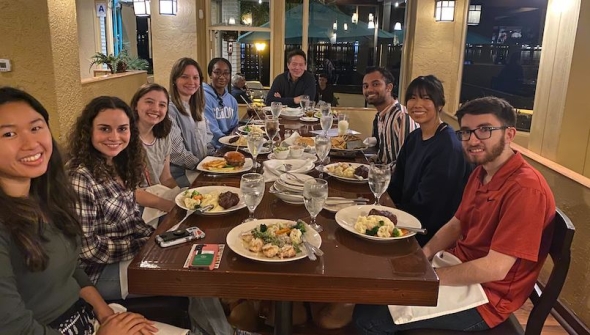 The Bucci Fellows program formalizes a course Bucci taught for neuroscience majors during his 15 years at Dartmouth. He would share the latest research with students who had developed a strong foundation in the discipline, preparing them for the opportunity to meet scholars in the field at the annual conference.

Bucci served as the Lincoln Filene Professor of Human Relations in the Department of Psychological and Brain Sciences. He had been a Dartmouth faculty member since 2004 and nurtured a generation of scholars during his time in the classroom and laboratory.

Bill Helman '80, a former chair of the Dartmouth Board of Trustees, was the lead donor in establishing the program's endowment, with support from Amy B. Warner '82.