Pushing Into New Frontiers of Neuroscience

Tor Wager’s lab studies how brain networks are connected with pain and emotion. 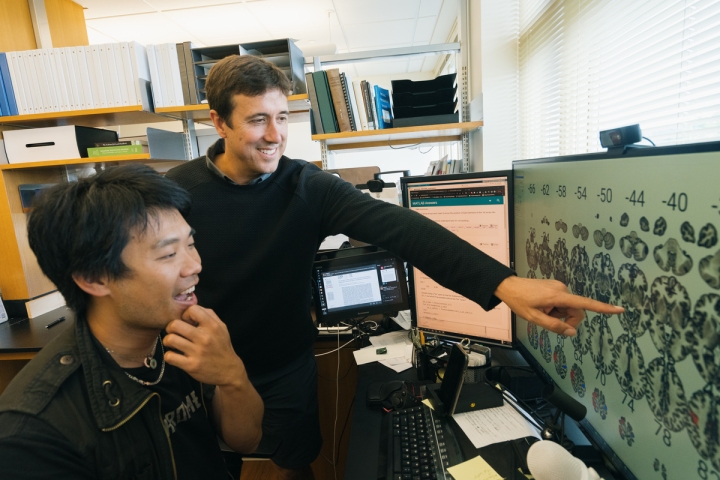 Tor Wager, the Diana L. Taylor Distinguished Professor in Neuroscience, sees the work of his Cognitive and Affective Neuroscience Lab as filling the space between clinical medicine and computational science in understanding pain and emotion.

“There’s a huge gap between these. We have a deep-learning and machine-learning revolution in every field, but it is focused on commercial computational applications,” says Wager.

The standard medical model is focused on pharmaceutical and surgical interventions, he says, rather than looking at how the brain, mind, and body interact.

“The clinicians who treat pain are focused on the physical manifestation of pain, not how pain relates to neural networks,” Wager says.

As the first hire in Dartmouth’s Breaking the Neural Code cluster and director of the Dartmouth Brain Imaging Center, Wager is leading research in this new area and supporting the work of scores of students and scholars who are pushing the limits of current understanding of the neurophysiology of pain, emotion, stress, and empathy.

For instance, he says, chronic pain is often not due to acute tissue injury, but how the brain has been trained to amplify and interpret bodily sensations.

“So what we’re trying to do is to understand what the neural code underlying a symptom like pain is, and how pain can become a feedback loop that we can’t break out of,” Wager says.

In recent years, Wager’s published research has been widely cited in the national media and has generated broad interest across social media platforms, including the recent papers “Neural Signatures of Pain Modulation in Short-Term and Long-Term Mindfulness Training,” published in the American Journal of Psychiatry, and “Effect of Pain Reprocessing Therapy vs Placebo and Usual Care for Patients With Chronic Back Pain,” published in JAMA Psychiatry.

Wager has six postdoctoral researchers, six graduate students, and three full-time staff in his lab. His lab has funded and supported scholars from some 20 different countries, including, currently, Iran, China, Germany, Israel, France, and the U.S.

“The Neural Code cluster has made this kind of multidisciplinary science possible. It allows us to be creative and flexible in a way that grants sometimes don’t,” Wager says. “The cluster is allowing us to break out of traditional research silos, taking on projects that cross traditional disciplinary boundaries and letting us approach the questions from new directions.”

And Wager’s lab, known as CANlab, established in 2004 at Columbia University and expanded at the University of Colorado, Boulder, prior to his move to join the Dartmouth neural code cluster, has launched dozens of top scholars and researchers in related fields. The CANlab work spaces, experiment rooms, and the fMRI suite in Moore Hall were a hub of activity on a recent summer afternoon. Melanie Kos ’20, a research assistant, paused from her work in a large common room in the lab with a dozen computer work areas.

Her research is looking at “immune empathic neural responses to animal suffering,” she says, which is using brain scans to track human brain responses to negative and positive animal images while also using blood draws to test whether the stress from experiencing animals’ suffering produces inflammation throughout the body.

She explained why she came to work in the lab.

“It was my last term of my senior year and I wanted to do research, and I had a class with Tor—principles of human brain mapping—an fMRI class, and I said I want to do research, and he said I have a grant in the works, so I joined last September,” Kos says.

Graduate student Bogdan Petre, Guarini ’24, was working nearby. He studies fMRI representations of pain in the human brain, using computational and mathematical modeling to try to come up with a three-dimensional image “to understand what its geometry actually is.”

Petre was working with Wager in Boulder and transferred to Dartmouth with him. “I went to grad school to work with him specifically.”

Postdoc Amin Dehghani, who earned his PhD at the University of Tehran in Iran, is experimenting with an electrical head-gear unit that uses electrodes to stimulate the brain to try to promote emotional regulation and pain relief. When he finished his degree in Iran, he was determined to contact Wager.

“Tor is very famous in the field of neuroscience and is maybe one of the best. I was going to continue my research, and as he had some research in this field, I contacted him, and so he gave me an offer and I came to the U.S.”

Though it wasn’t as simple as that. This was all happening as the COVID-19 pandemic hit and complications with visas and travel clearance repeatedly delayed Dehghani’s arrival at Dartmouth. But Wager kept in contact and was very helpful over more than a year to help work through the details, he says. That same afternoon earlier this summer, Dehghani was conducting an experiment down the hall with a subject using the transcranial stimulation headgear. Surina Prabhu ’24, an undergraduate research assistant, was tracking data on a large monitor outside of the test room. She explained that she was taking an intro to psychology class with Wager in her first year when she decided she wanted to study neuroscience.

Wager says the academic clusters at Dartmouth give scholars and researchers the freedom to go beyond the boundaries that often go along with the traditional grant funding system.

“Here’s the map of what’s established science, and here’s a lot of crazy ideas, some of which might be significant, so what’s the next step? How do you decide what to focus on, what’s plausible, what’s grounded?” he says.

“That’s something we can’t address using the standard medical model. And frankly, it’s something that we have to understand through the mechanisms of basic scientific research on how the neural code works and what’s going on. That’s going to give us the next generation of ideas.”