Please join us for a talk given by Dr. Ev Federenko, the Frederick A. (1971) & Carole J. Middleton Career Dev Assoc. Professor of Neuroscience, Brain and Cognitive Science, at MIT. 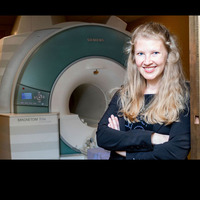 The language system in the human brain

Abstract: The goal of my research program is to understand the representations and computations that enable us to share complex thoughts with one another via language, and their neural implementation. A decade ago, I developed a robust new approach to the study of language in the brain based on identifying language-responsive cortex functionally in individual participants. Originally developed for fMRI, we have since extended this approach to other modalities, like intracranial recordings. Using this functional-localization approach, I identified and characterized a set of frontal and temporal brain areas that i) support language comprehension and production (spoken and written); ii) are robustly separable from the lower-level perceptual (e.g., speech processing) and motor (e.g., articulation) brain areas; iii) are spatially and functionally similar across diverse languages (>40 languages from 11 language families); and iv) form a functionally integrated system with substantial redundancy across different components. In this talk, I will highlight a few discoveries from the last decade and argue that the primary goal of language is efficient information transfer rather than enabling complex thought, as has been argued in one prominent philosophical and linguistic tradition (e.g., Wittgenstein, 1921; Berwick & Chomsky, 2016). I will use two kinds of evidence to make this argument. First, I will examine the relationship between language and other aspects of cognition, including social cognitive abilities and complex thought/reasoning. I will show that the language brain regions are highly selective for language over diverse non-linguistic processes while also showing a deep and intriguing link with a system that supports social cognition. And second, I will examine different properties of language and argue that language both has a) properties that make it not suitable for complex thought, and b) properties that make it well-suited for communication. Both of these lines of evidence support the communicative function of language, and suggest that the idea that language evolved to allow for more complexity in thought is unlikely.